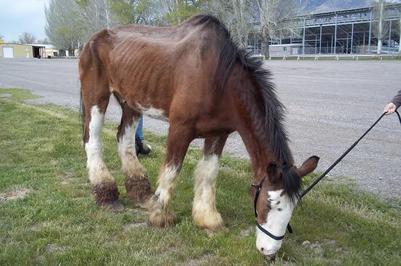 Perseverance Ranch began as a dream for 2 couples to develop adjoining 20 acre ranches for eventual retirement. As happens, one couple changed plans, and so were bought out by the current owners. Sadly, a neighbor also passed suddenly and his adjoining 40 acres were purchased from his estate, making Perseverance Ranch an 82 acre facility nestled in its own box canyon, with deer, bald eagles, golden eagles, and other assorted wildlife as welcome seasonal transients. However, this was only the beginning of the story.

With plenty of room and resources, we realized that there was a need we could fill as a facility that could accept unwanted horses, burros, and mules. Although this was not the original intent of the property, it was decided that some animals could come to the ranch while options were assessed on what to do with them. Then, one day, a call was received that would map the future of the ranch and its inhabitants permanently.

Best Friends Animal Society advised of a Clydesdale gelding in Northern Utah that had been found in a remarkably starved condition. While they were more than happy to provide finances for all costs, they simply had no room for him and wanted to know if our facility was available. We were more than happy to accept him, only to realize that the animal control facility charged with his care was an ineffectual bureaucratic nightmare. It was like trying to pry a cheeto from a rat. Finally, after a maddening and unnecessary period of time in which he was held at a fairgrounds with literally no medical attention, he was bought at auction for $35. We named him Roy, and transported him immediately to Best Friends for quarantine and medical treatment by their on site veterinary staff.

Sadly, Roy died shortly afterward, not from complications of starvation but from  a fatal disease he contracted from other animals being housed at the fairgrounds. Roy never had a chance. Trust me when I say that more than one evil imagination had to be suppressed, but with time we were able to refocus our energies and come to a remarkable conclusion... we would become a permanent home for special needs equines with nowhere else to go.

Today, we have 24 current residents, all with permanent status to include food, water, shelter, companions, and the best medical attention we can afford. We are also a dedicated "No Kill" facility, believing that any equine not suffering irreversibly deserves the same sanctity of life we enjoy ourselves. We do this because we believe we have been led to act. We do this because it's our calling.

We do it for Roy.